Can you see all the jellies?

I’m currently in Indonesia on a much needed vaca, and obviously that means trying to find as many jellyfish as possible.  Asking a Bali guide to take you jellyfishing is, from what I gather, not a regular request. But local fisherman Captain Momol rose to the challenge, and was the best jelly ranger a girl could ask for. He took on an adventure to find jellies in salt marshes around the island of Nusa Lembongan, and after a bit of searching, we discovered a whole field of upside-down jellies (Cassiopea).

We kayaked through some seriously magical mangroves to reach these guys, with the biggest jellies being larger than dinner plates! This was my first time seeing Cassiopea in the wild, and it surpassed all my expectations.  The water was so shallow the jellies were about a foot away from my face while snorkeling, and came in a huge variety of shapes, sizes, and colors.

Though all jellyfish have the capacity to sting, many don’t sting humans and nearly half of the commonly seen jellyfish (rhizostomae) don’t have tentacles. Cassiopea do sting a bit, but the sting is sort of like a mosquito bite (at least that’s what Captain Momol told me) and because they don’t have tentacles, it’s possible to swim right next to them without coming into contact. Despite swimming all around them, I didn’t get stung once.

These jellies are the animal equivalent of those beach bums that sit in the sun tanning all day long. Except instead of tanning, these jellies get brown because of algae growing in their bodies, which they also use as a means to generate food (like corals). So they’re in no hurry to go anywhere, happy to catch rays in the marsh from sun up to sun down.

Along with the jellies, we saw some sweet sea cucumbers, including these (I think they’re a kind of Synaptid). They were up to a meter long!

Plus! Bonus colonial ciliates, Zoothamnium niveum, which look like tiny down feathers (you can see the ridges of my fingerprint behind them for scale)

There were also lots of birds, tokay geckos (at least we hear them), and of course botanizing galore, with many many species of mangroves to ogle over, including Xylocarpus granatum (cannonball mangrove), and Rhizophora mucronata (loop-root mangrove), which can be used for both medicine and food.

It’s a trip I’d do again and again, if only time would allow. And if you’re in the area, do look up Captain Momol and the lovely jelly garden! 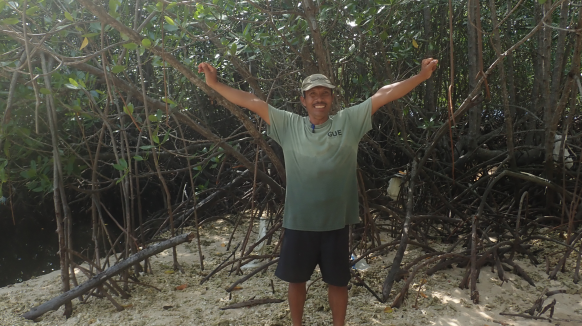 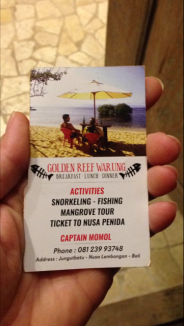